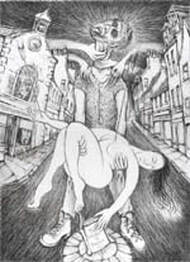 Threshold ..... 2012 ..... 180 x 121 cm
Ah, cruel hypocrisy what a sufferance I preach in drawn black chalk, lo There he stands in false
salvation when he has dealt the blows himself. His penance fashioned vest of hair, such
anguish glows in needled Halo sanctity, and fears for his future. Cold and bad as Black
of Kergord he is. And arrow wounded grace, so pure in white, suffers with contempt. Serlio
facades, and those within crueller still. Bewitch them all with street quine scratches, ghost
come forth reveal true history on the Cross. This threshold book may close and white vanish to
sullied grey and loss. In this city his bones will melt, its talons gripped and choked forever in
empty streets - who cares. 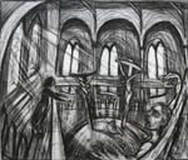 The Quiet Life ..... 2008 ..... 121 x 180 cm
Ian Drummond was fatally injured in Montrose Street, Brechin. He was attacked by Archie Wallace after verbal insults were traded by their girlfriends in the Co-op shop. Wallace, who later died in Shotts prison, hatcheted Ian who later died in hospital. Ian used to say that all he wanted was the quiet life.

The Hand of Man, Invermark ..... 2013 ..... 121 x 177 cm
In January 2013 a pair of White-tailed Eagles attempted to nest in Glen Esk near Brechin. They had started to build the first nest recorded in East Scotland for over 100 years. The huge pine tree with the nest in it was cut down illegally.

The Easter Apocalypse of Fergus ..... 2014 ..... 121 x 170 cm
On Eagle Wings, Fergus will Come, Saint or Not, A Garron Pegassus, Down from the Hills, To Awaken Sinners for Easter Ressurection, A Boat of Fools Lost and Forgotten, awash in a Noah sea, Brechin afloat as Crown of Thorns, and Caterthun as Golgotha. 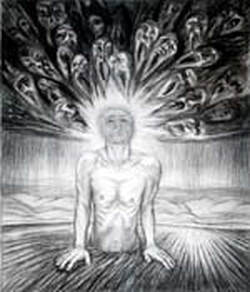 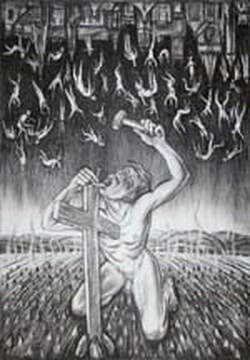 The Judgement ..... 2011 ..... 175 x 121 cm
Nail my Tongue to the Cross to punish a Judgement of Sarcasm. The carnal sinners of upturned Brechin are consumed in their nakedness, maybe you are one. A fugitive life marked by a wooden memorial cross already starting to rot with wood-worm. 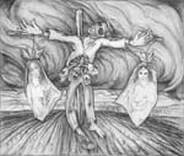 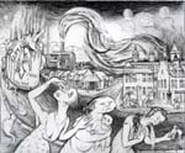 Sacone-Pageant Day ..... 2011 ..... 121 x 145 cm
The animal carcasse incinerator on Montrose Road run by  Sacone Ltd was notorious for odours of rotting and burnt flesh. Many civic days were spoiled by  odours drifting over the town, people felt sick, couldn't leave windows open and there were concerns for health. I presented a public petition to the Scottish Parliament about it in 2006.

Revelation ..... 2010 ..... 121 x 180 cm
Polish immigrant Peter had problems and hung himself in the church hall where he was given
temporary accommodation. After mass, tea is served, feel a presence sometimes; the cut end of
the rope survives - the Devil at the door.

Polish Birthday Party ..... 2009 ..... 121 x 178 cm
A birthday party at 162 Montrose Street, Brechin in 2009.  In a haze of cannabis and drink a prank to trim someone's prized moustache went wrong; it ended with Karol Szwejkowski murdering his friend Witold Reichert.

Shadow on the Land-Polish Worker ..... 2009 ..... 121 x 165 cm
One Polish worker in a huge field outside Brechin laying the white mesh that protects emerging crops. Migrant workers come and go anonymously like shadows. Looking towards Glen Esk. 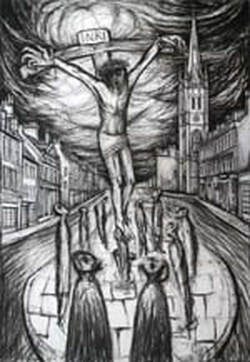 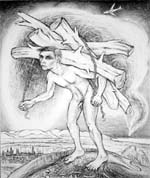 Life Burden ..... 2009 ..... 165 x 121 cm
An elemental self on a path of thorns, burdened by the necessity of survival. At the time of drawing western civilisation was brought to ground by Nature in the form of the Icelandic volcanic cloud.

Lead Us Not Into Temptation ..... 2009 ..... 121 x 165 cm
She rides him with bitted reins, tempts him with false, carrot-red lips behind a mask of hate and contempt. The gullible, donkey-man reaches into the black void to feel for, to please, to share in her love, to discover her even blacker, all consuming self. 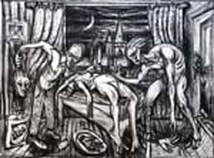 Home Sweet Home ..... 2008 ..... 121 x 170 cm
Jolanta Bleidate was gruesomely murdered and dismembered by Vitas Plytnykas and
Aleksandras Skirda at Earlsdon House, Brechin in 2008. Jolanta was killed to steal her hard
earned savings from cash machines. They carried her head in a Lidl's bag  and her body in
a suitcase to Arbroath's seaside harbour. This has been and is a controversial depiction but
I felt that this horrific event had to be expressed in a dramatic scenario.

Thunder in the City-Harley Davidson Day ..... 2013 ..... 121 x 170 cm
A motorcycle parade through the streets of Brechin bringing Harley-Davidson enthusiasts to the area where Davidson had his roots. Trying to give a 'fish-eye' view along Swan and St David's Streets.

Glasgow Cross Crucifixion ..... 2010 ..... 121 x 169 cm
Glasgow Cross, the heart of Glasgow, is a fitting location for my third crucifixion scene. St. John Ogilvie, a catholic priest, was hung and gralloched here in 1615. The portrait in the foreground is Peter Corvi who was a restaurateur at the Cross where he dutifully served all types of people in his Val D'Oro fish and chip shop. 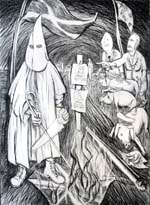 Edzell Klan-The Scapegoat ..... 2012 ..... 166 x 121 cm
A flagpole in a village near Brechin was cut down, the Union flag burned and malicious notes left about two councillors. Anyone (scapegoat) who had written nationalistic views about the Saltire flag to the local press or an artist creating drawings with a 'political' issue were erroneously investigated by misguided 'enquirers'.

The Hand of Man, Invermark ..... 2013 ..... 121 x 177 cm
In January 2013 a pair of White-tailed Eagles attempted to nest in Glen Esk near Brechin. They had started to build the first nest recorded in East Scotland for over 100 years. The huge pine tree with the nest in it was cut down illegally. 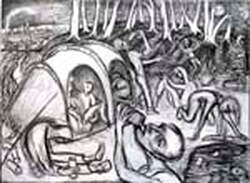 Drinking Den ..... 2008 ..... 121 x 178 cm
Kids from Brechin escape here to Craigs Pool and other places to get away from it all; to commune with nature, get pissed, be sick and scare themselves half daft. The path leading from Brechin in the distance symbolises a way out for those who have no bonds, unlike me. 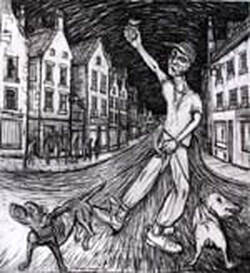 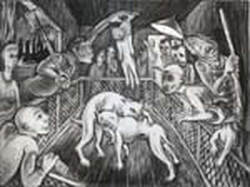 The Dog fight ..... 2012 ..... 121 x 162 cm
The 'under-world' organisation of Terrier fighting and Badger baiting in certain areas of Scotland is well known. In the Brechin and Montrose area, residents have suspected that their pet cats are being taken to 'train' terrier dogs to fight and kill; gambling goes in hand with these illegal dog fights. 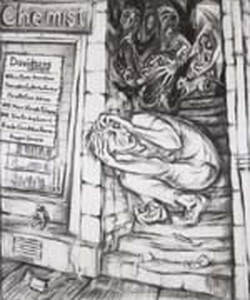 Dark Heaven ..... 2011 ..... 146 x 121 cm
An old stone staircase in the High Street is sometimes used by drug addicts to recover after treatment at the chemists. Their misery is very evident at times. The causes for their circumstances can be harrowing; I have placed a 'show me doll' on the window sill. 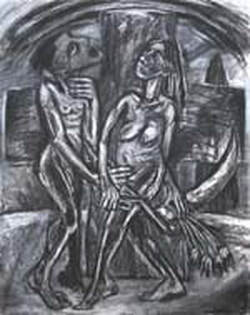 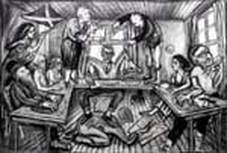 The Community Council ..... 2009 ..... 121 x 180 cm
Desperation, judgement, control, deceit, conceit, power, manipulation, devotion and contempt all around the table of community involvement. The broken, journalistic back of Brechin is curled on the floor whilst the puppeteering of political intent frustrates all proceedings of what just might be good for Brechin. A young nationalist prods at the 'old ways - the proper ways'. Contempt for boring inaction and political 'charm' will be the
death of me - I cut my throat to it all. 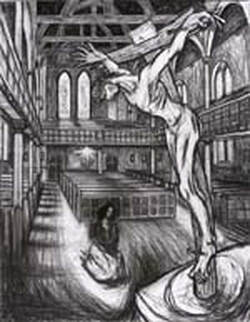 Communion ..... 2008 ..... 150 x 105 cm
The interior of St.Ninian's Church in Brechin.  The solitary catholic woman is overhung by Christ on the Cross. In coveted love, his flesh and blood hangs over her like a judgemental Sword of Damocles. 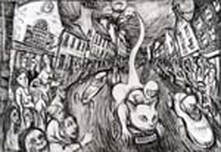 Halloween Cartie Race ..... 2012 ..... 121 x 180 cm
Brechin has one of the steepest High Streets in Britain so it is ideal for a grand Halloween cartie race. Star attraction was a cartie in the shape of a cat. 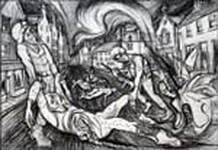 Car bomb-High Street ..... 2010 ..... 121 x 180 cm
Terrorism can strike anywhere and this comparative scenario visualizes what we might only read about or view on TV and throws the viewer into a desperate situation in a recognizable local Brechin venue which is usually safe and quiet and secure. 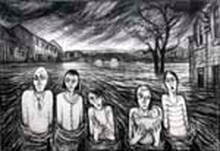 Broken Promises ..... 2010 ..... 121 x 177 cm
The flooding of the River South Esk at River Street in Brechin is a thing that is suffered to this very day by its residents. Flood prevention plans have been afoot for years and yet nothing has been done; nothing except paper promises. 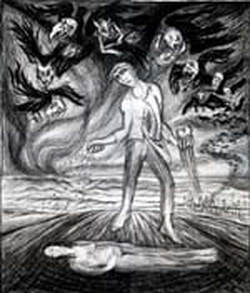 The Blind Sower ..... 2010 ..... 143 x 121 cm
To give and to give evermore your heart and soul for something out of reach and yet, ironically found to be worthless. Brechin in the background is source for malcontent, calumny, jealousy, hate, love and indifference but we doggedly stay to sow in vain, to change a culture that seems so cold. The seeds are sown for her, Renaissance girl of the land. Long, black, liquid curls repel, The winged nightmare to Blossom in the sun. 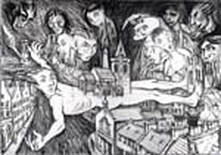 The Brechin Model-Inquisition by the Righteous ..... 2013 ..... 121 x 180 cm
A scale model of the city centre as it was in the 1800's is on exhibit in the museum.
My daggered roots as a Christ like Gulliver pinned like an Entomologist's specimen under the Inquisitorial gaze of those who Are, and Those next to God.
The Deil sets him Free ! 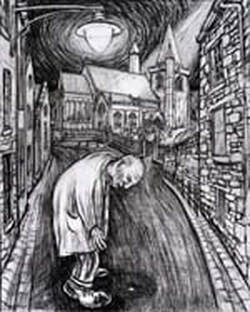 Blessed by the Light ..... 2008 ..... 160 x 121 cm
A tribute to my friend Harold who was a street scaffie. He was often seen in his later years trailing the streets looking for odd lost things. He is depicted in his discarded loneliness near Brechin Cathedral, the street light has blessed him with a coin; in contrast, the church congregation is blessed by heaven's illuminated path of virtue. 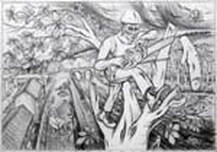 The Chestnut Tree ..... 2015 .....121 x 180 cm
The ancient Chestnut Tree at River Street in Brechin was the 'friend' of many residents.
Through the history of social change and flooding it has witnessed a community's life
and endurance and acted as 'voyeur'. Sadly, now chopped down to make way for the flood
prevention scheme which, ironically, will benefit residents in the future. 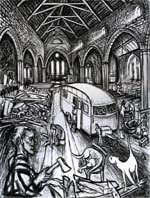 All Welcome ..... 2008 .....161 x 121 cm
The ancient interior of Brechin Cathedral ripped apart and abused by disrespectful travellers who misinterpret the 'All Welcome' sign outside. Fortunately a Hogarthian scenario, nevertheless travellers in this area have a justified reputation for defiling and littering the countryside around their encampments. 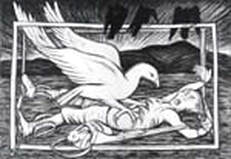 Aquila's Revenge ..... 2013 ..... 121 x 177 cm
In 2012 a young Golden Eagle is found with two broken legs after suffering a lingering
death  not far from Brechin, possibly caused by a spring trap set by a local game-keeper or
some other malicious act. Staged as it grows dark within a crow trap,this is my
interpretation of a justified revenge by the white ghost of the murdered eagle. Mount
Battock in the background.